As we know, there are so many constellations we can observe in the night sky, and since the ancient days, our ancestors have treated the night sky with great importance.

Constellations play an integral part in Greek and Roman mythology and religion. Constellations also served important practical functions as a navigational tool for sailors and travelers as well.

This is all possible because there are constellations in the night sky that remain relatively fixed in the sky throughout the years, which are known as circumpolar constellations.

Here, we will learn all you need to know about circumpolar constellations, but let us begin from the very beginning.

It circles the north and south celestial poles (hence the name circum, meaning encircling, and polar) without ever dipping below the horizon.

This is as opposed to spring and winter constellations, which are seasonal and you can only see them in specific time of the year, depending on your location. This is because of the Earth’s axial tilt as it revolves around the Sun.

Circumpolar constellations, however, appear to rotate around the Earth’s poles.

In the northern hemisphere, circumpolar stars rotate around Polaris, the North Star, but it’s important to note that circumpolar constellations actually depend on the observer’s location.

Meaning, people in the northern hemisphere can always see the northern circumpolar constellations, and vice versa.

A unique phenomenon to consider is that observers on the planet’s Equator cannot see any of these circumpolar constellations.

The Polaris, the North Star, is actually a part of the Ursa Minor constellation, and as we’ve discussed the Ursa Major, Ursa Minor, Cassiopeia, Cepheus and Draco constellations can always be seen as circling the Polaris year-round if you are located in the Northern Hemisphere.

Out of these five, three are fairly easy to observe: Ursa Major is the largest of all northern constellations, so it is easy to find, not to mention it also consists of the famous Big Dipper.

Ursa Minor, on the other hand, contains the Little Dipper, that albeit slightly fainter than the Big Dipper, is still fairly easy to find in the night sky.

We can also easily find Cassiopeia by looking for its unique W shape. Draco and Cepheus, on the other hand, are not that easy to find, although they are actually pretty big.

Draco, in fact, is the eight-largest constellation in all the celestial sphere, but it’s brightest star, Elnanin or Gamma Draconis isn’t very bright, only as bright as Mizar, the fourth brightest star of the Ursa Major.

We can find Cepheus between Ursa Minor, Draco, and Cassiopeia. It is the 27th largest constellation, so it’s not that small, but its brightest star, Alpha Cephei or Alderamin, is only the 89th brightest star in the night sky.

Ursa Major is one of, if not the most popular constellations, often featured in popular culture.

It is especially famous for the Big Dipper, the spoon-shaped asterism, which is arguably one of the most familiar shapes in the night sky.

The Big Dipper, being a circumpolar star, is always visible all year long for observers in the Northern Hemisphere.

The constellation is referenced in many ancient literatures, including Homer, and even the Bible. Various mythologies and legends all around the world associated the Ursa Major constellation with a bear.

For example, in Greek Mythology, Ursa Major is associated with the story of Castillo, a beautiful nymph who had sworn a vow of chastity.

The god Zeus, however, saw Castillo one day and fell in love. Thus, Castillo broke the chastity vow and had a son named Arcas. Angered by Zeus’s betrayal Hera, Zeus’s queen, cursed Castillo into a bear. 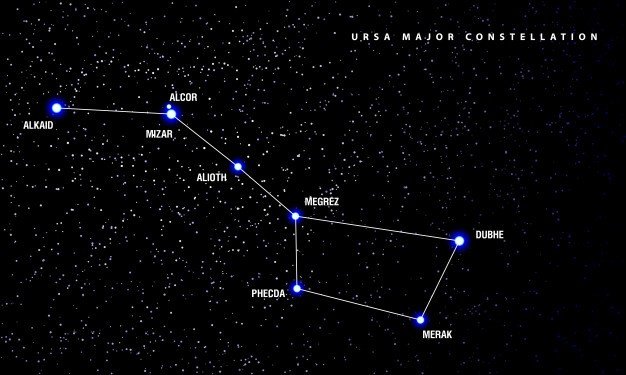 The Ursa Minor is also called the little dipper, but it is especially famous for the last star in its tail: the Polaris, or also known as the North Star.

The star never moves from its spot in the northern sky, making it a very important and famous star that has been used throughout the years in navigation by ancient travelers and sailors.

The Ursa Minor in Greek Mythology is associated with Ida the nymph. According to the myth, the child Zeus was hidden on the island of Crete by his mother to protect him from his father, Cronus.

Cronus, fearful of an old prophecy that said that one of his children would usurp him, swallowed five of his newborn children.

Ida was the nymph who took care of the young Zeus on the island. Ursa Minor is believed to represent Ida. 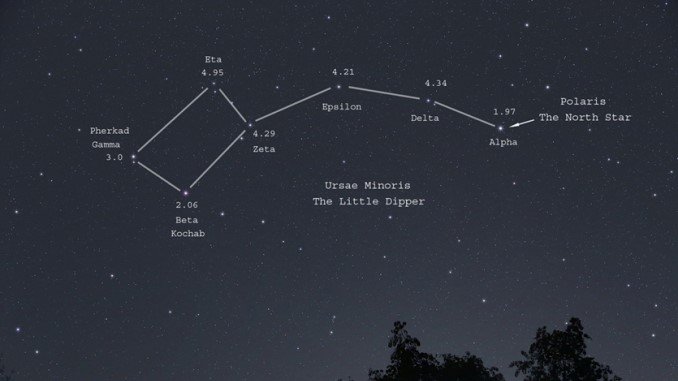 Cassiopeia is famous with its very discernible shape, that looks like a W (or an M) in the sky depending on where it’s seen. 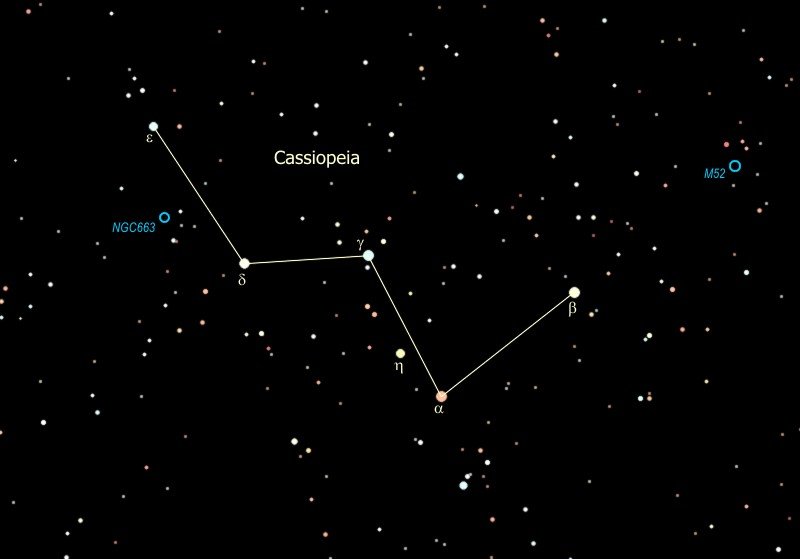 Cassiopeia in Greek mythology was the wife of King Cepheus (of the Cepheus constellation), an Ethiopian King.

Both Cassiopeia and Cepheus, according to the myth, were cursed by the god Poseidon to circle the celestial pole forever, with Cassiopeia spending half the year upside down as punishment for her vanity.

As we’ve seen above, the story of Cepheus is tied to that of Cassiopeia. Cepheus was actually a very important constellation in ancient times because it contains cepheids, which were used in navigation to measure long distances. 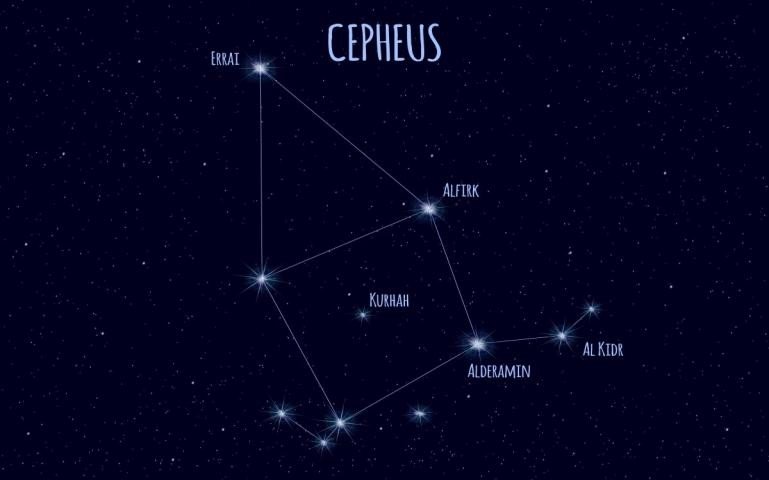 The constellation Draco has a fairly unique shape: a trapezoid with a long winding tail, resembling a dragon, hence the name.

In Greek mythology, the constellation Draco is associated with the story of 12 labors of Hercules, and Draco represents Ladon, the dragon that guarded the golden apples in Hesperides’ gardens.

In Roman mythology, however, Draco was one of the giant Titans who warred with the Olympian gods, that was killed by Minerva and thrown into the sky to form the Draco constellation. 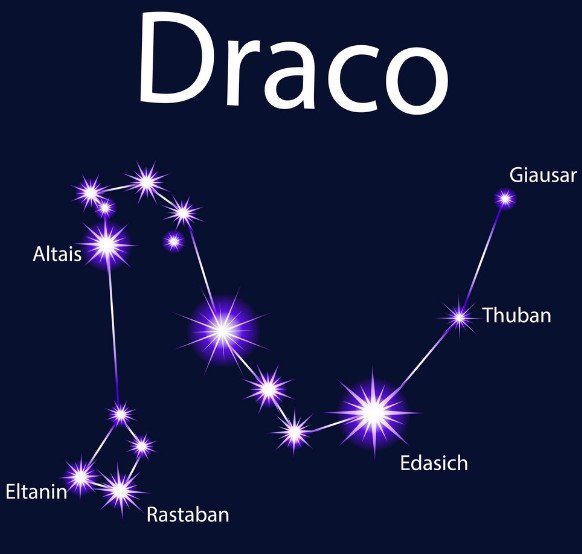 As discussed, there are only three southern circumpolar constellations, but they aren’t less interesting than those in the northern hemispheres: Carina, Crux, and Centaurus.

Crux is actually the smallest constellation in the sky, but ironically it is the easiest to identify out of the three circumpolar constellations because it contains the famous Southern Cross.

The Southern Cross is featured on the national flags of Brazil, Papua New Guinea, Samoa, New Zealand, and Australia, showing its importance even in this modern age.

Carina, on the other hand, contains Canopus, the second brightest star in the sky, as well as Miaplacidus, the 28th brightest. To find Carina, we can look between Crux on one side and Canopus on the other.

Centaurus is the ninth largest constellation, famous for the star Alpha Centaury, the nearest known star system to Earth that is also the third brightest star in the sky.

According to the myth, Jason and the Argonauts sailed to Colchis to capture the Golden Fleece.

Some of the ancient Greek written records actually recorded the Centaurus constellation, and as the name suggests, Centaurus represents the Greek mythological beast Centaur: a half-man, half-horse creature.

There are actually many famous centaurs in Greek mythology, but it’s not entirely clear which centaur is represented by Centaurus.

Yet, Centaurus is usually depicted as a centaur sacrificing an animal, and the front legs are marked by Alpha and Beta Centaury, two of the brightest stars in the sky.

The two stars also serve as pointers to the famous Southern Cross of the constellation Crux, which positioned just under Centaurus’ rear legs.

Crux is another southern circumpolar constellation, positioned opposite from Cassiopeia on the celestial sphere (meaning, both will never appear in the sky at the same time).

Crux is the smallest constellation of the 88 modern constellations, but it is easy to find because it is also one of the brightest, especially because it also contains the famous asterism Southern Cross.

The ancient Greeks consider Crux as part of the Centaurus constellation, but the constellation then dropped below the horizon for Europe and most of the northern hemisphere (some linked this disappearance to the crucifixion of Christ).

We only rediscover Crux after its ‘disappearance during the great expeditions of the late 15th and early 16th century.