So what is the largest star in the known universe? The answer is UY Scuti. This star is over 1,700 times the radius of our own sun, yet only weighs 30 times our sun’s mass. UY Scuti is classified as a red supergiant and is referred to as a pulsating variable star – a star whose light fluctuates when viewed from Earth. 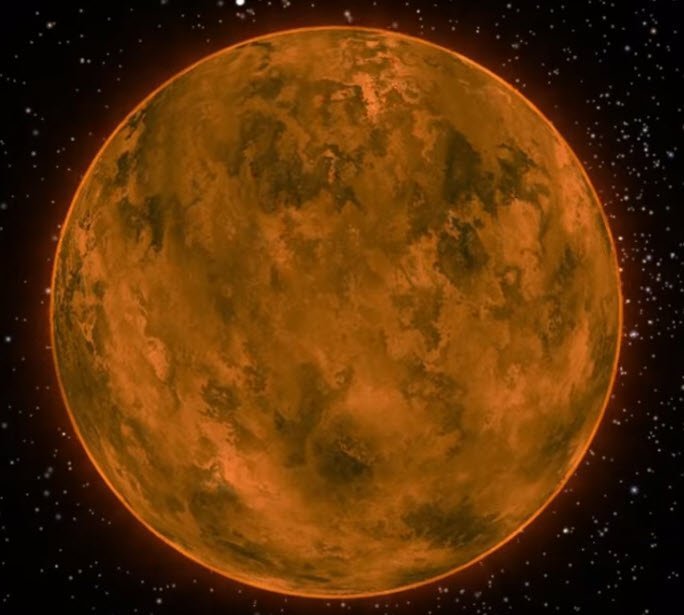 When was the largest star in the universe discovered?

Where is UY Scuti Located?

To find the largest star in the universe you’ll need to aim your telescope towards the Eagle Nebula. This nebula is often referred to as the “Pillars of Creation” or “The Hand of God”. You can see from the image below why it gets this name. It is thought that stars are born here.

The Eagle Nebula is easily visible through a good pair of binoculars, or a low-powered telescope. That said, UY Scuti, while extremely luminous, is only a 9th magnitude star when viewed from Earth. Wait a minute, what do I mean by magnitude?

A star or stellar magnitude refers to the apparent brightness of the celestial object when viewed from Earth. This means, the farther the star or object is from Earth, the higher its apparent magnitude will be (higher number means not as bright). Of course, this doesn’t diminish the actual brightness, or, luminosity, of the star or object. It just means it doesn’t appear as bright from Earth…phew…okay, I’m glad we cleared that up!

So while UY Scuti is the largest star in the universe and it’s incredibly luminous, it doesn’t appear that way from Earth due to its shear distance (9,500 light years away). So with a low-mid powered telescope, such as the NexStar 4SE on Amazon, UY Scuti is located about 2° north of 5th-magnitude Gamma (γ) Scuti and 4° southwest of 4th-magnitude Alpha (α) Scuti just below the tail of Aquila. 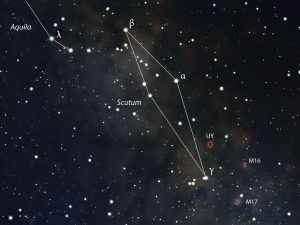 Just how big is the largest star in the universe?

While it’s difficult to say just how big the largest star in the universe, UY Scuti, is due to its distance. It is believed that it is approximately 7 AU (Astronomical Units) in diameter or a radius of 3.5 AU. One AU is the distance from the Earth to our Sun, or approximately 150 million kilometers or 93 million miles.

So to put that into perspective, if we were to drop UY Scuti directly in the middle of our solar system where our sun currently resides, guess what??? The Mercury, Venus and Earth would be no more. In fact, UY Scuti would swallow up Mars, Jupiter and most likely Saturn…it is that immense!

This YouTube video below does a pretty good job putting a list of the biggest starts from our own sun right up through to the largest star in the universe, UY Scuti.

Can there be life-sustaining planets orbiting UY Scuti?

This is a tricky question to answer, and of course we don’t know for sure. However, to answer this question we would need to look at the region about UY Scuti, known as the Goldilocks Zone. This is the region around a star that is that to be habitable because the temperature is just right – not too hot and not too cold.

While it is only an estimate, it is thought the Goldilocks Zone for UY Scuti is between 700 to 1300 AU. That’s an extremely large distance, roughly 150 billion kilometers if we took the average of these two numbers. That means it would take the light of UY Scuti approximately 40 days to reach a planet in the habitable zone.

While it’s not impossible to consider planets orbiting this zone around UY Scuti, the likelihood that they are sustaining life is minimal. Currently, UY Scuti is fusing helium at its core, meaning it has since exhausted hydrogen – we know this because it is a red supergiant. At this stage of a stars fusion process the star is heading towards its inevitable demise.

Once it exhausts its helium energy it will move on to consume higher level elements such as carbon, oxygen, lithium, neon, and silicon. It will consume these elements quite rapidly, a million years or so (not long in astronomical terms).

Once it exhausts all these elements it will begin to produce iron, and it will eventually collapse on itself. When a star collapses it is referred to as going Supernova. When a star goes supernova it is one of the most destructive acts of nature. The energy and explosive force that is released is unparalleled. It will be quite a fireworks show!

Well I hope you enjoyed the article! UY Scuti, is without question, the largest star in the universe that we currently know about. If you found this article interesting, be sure to check out the articles below too.