The moon’s surface has always been a mystery for many experts and scientists, and the hundreds of craters that cover the moon have always been the most fascinating feature of the lunar surface.

Here, we will learn some of the interesting facts of the craters on the moon: How many are they? Which one is the biggest? And other interesting questions.

Let us begin with the first one.

How Many Craters are on The Moon?

The very short answer here is we don’t know. If we look to the moon through a telescope, we can see a countless number of craters but at the same time, we can’t be 100% sure which of which is an actual crater, which is (for example) just part of a moving lunar surface, which is just a micro crater (zap pit), and so on.

We should remember that there are still only a very limited number of moon explorations even until today in 2020, and so a definitive and accurate answer is very difficult. This is not only because of the numbers, but we also need to define which is an actual crater, and which are other types.

When a crater is a mile across in diameter or more, then it’s easy: it’s definitely a crater. Yet, there are “craters” that are only an inch in diameter or even less. Now, is it a crater or just part of the undulating lunar surface? Difficult, right?

So, there is no accurate answer, but based on crater size and after the work of many difficult expeditions to count these craters, here are the best estimations for this answer:

So, as we can see, there are a lot of lunar craters.

How Are Craters Formed on The Moon? 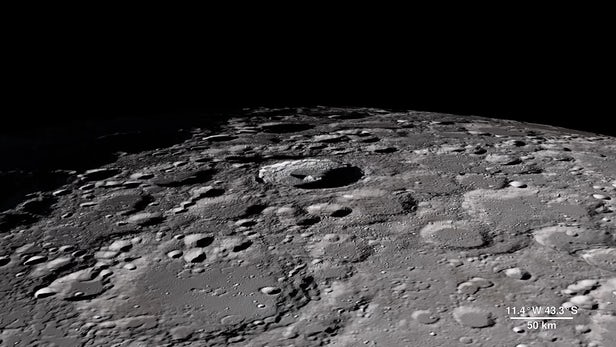 Across centuries along with the history of astronomy itself, many theories have been proposed by various astronomers, philosophers, and scientists about how moon craters were formed.

Yet, it was only until the Apollo 11 finally went to the moon and took the valuable rock samples that we can get a relatively definitive answer by confirming past hypotheses.

The short answer here is that moon craters are formed by space debris. Throughout its existence for billions of years, the moon has been hit by millions and probably billions of asteroid chunks and even huge comets.

Since there isn’t any atmosphere on the moon, there is no water and air that can soften or erode the crater edges. That is why the moon craters have a distinct shape that is similar to how they here when they were initially created.

This has been confirmed with the analysis of the rock brought back from the moon, which showed how the moon surface is actually covered by a very fine layer of dust and also regolith, a layer of unconsolidated broken rock.

Just beneath this surface lies a thick layer of fractured rocks, showing how the moon has been pounded by impactors, cosmic rays, and solar wind continuously.

What Is The Oldest Crater on The Moon?

Scientists and experts believe that the oldest named crater of the moon is the one named Baily, which is believed to be over three billion years old.

Named after the French astronomer Jean S. Bailly, Baily is also the largest named crater with a diameter of 303 kilometers—that is, around 9% the diameter of the moon itself—. Baily is located in the southern hemisphere on the near side of the moon (the side facing the earth), near the south-west limb of the moon.

So, how can scientists determine the age of a crater? Lunar craters have several unique characteristics from each other that allow us to differentiate them. In general, a lunar crater consists of a crater wall (and floor), a raised rim, a central peak, and materials splashed out of the ground surrounding its area.

With this being said, older craters tend to house smaller craters in its central floor: the more small craters contained within it, the older the crater is. Based on these criteria, experts have determined that Baily is the oldest named crater on the moon, but there are actually a lot of craters that are over two billion years old.

It is well believed that the South Pole-Aitken impact basin, on the far side (dark side) of the moon actually hosts the oldest craters (which are unnamed).

What Is The Largest Crater on The Moon?

The largest crater of the moon is the South Pole-Aitken (or SPA) basin, which is 1,600 miles or 2,500 kilometers in diameter and with 8.1 miles (13 kilometers) in depth. The latest study, which is quite recent in 2019, has suggested that the SPA basin may contain a massive chunk of metal that is estimated to be larger Hawaii’s Big Island.

In fact, the South Pole-Aitken Basin is the largest named impact crater in our whole Solar System.

Since the South Pole-Aitken is located on the far side (dark side) of the moon, so it can’t be seen from the Earth even if we are using the most powerful telescope. To put it into context, the oval-shaped SPA basin would stretch from New York to Sacramento, and it is six times deeper than its width.

In 2011, NASA launched a mission dubbed the GRAIL mission to map the moon’s gravity for a year. The mission used two spacecraft in the same orbit (GRAIL-A and GRAIL-B). These two crafts would move closer or away from each other, and measuring devices would be utilized to measure the changes and generate accurate imaging of the moon’s gravitational field.

In relation to the SPA basin, one of the main science objectives of the GRAIL mission is to determine the sub-surface structure of these impact basins and the actual origin of the mass concentrations. Based on this mission, NASA saw a significant difference between the SPA basin when compared to other lunar craters.

For instance, other lunar craters have gravity anomalies in the form of a bulls-eye pattern, but not the SPA basin. Even today, there are still many scientific mysteries surrounding the SPA basin and its formation.

What Is The Deepest Crater on The Moon?

Again, the South-Pole Aitken Basin is both the biggest and deepest lunar crater with 8.1 miles (13 kilometers) in depth. To put it in context, the SPA basin can engulf the U.S. from the East Coast through Texas.

What Is The Smallest Crater on The Moon?

A tricky question to answer. First, there are a lot of craters that are microscopic in sizes, which can be found in rocks returned to earth from the moon.

However, the smallest named lunar crater is Sampson, which is only 1.5 km in diameter (0.53 mile) and is located near the central part of the Imbrium Basin (which is one of the largest lunar craters).

The crater was named after Ralph Allan Sampson, a British Astronomer.

What Is The Coldest Crater on The Moon?

A lunar impact crater named Hermite is not only the oldest crater on the moon but actually is the coldest place in the whole solar system according to NASA’s Lunar Reconnaissance Orbiter.

Hermite is located close to the moon’s north pole and was officially named in 1964 by the International Astronomical Union. Physically, Hermite is a worn crater (mostly eroded) with a rugged outer rim that shows signs of past impacts.

Hermite is 108.64 kilometers in diameter and currently has unknown depth (not yet accurately measured).

What Is the Dark Side of the Moon?

The reason it’s referred to as the “far side” or “dark side” of the moon is due to the fact that the lunar orbit is almost in perfect synchronicity as its orbit about the Earth. Therefore, we see the same side of the moon all the time.

The Moon: A History for the Future

Written by Oliver Morton, The Moon is a book about a proactive movement to motivate companies and even nations to visit the moon and begin a new round of human explorations.

In it, Morton writes about how the moon was formed, and an interesting angle about the history of lunar sciences. A lot of new information and unique insights that might interest readers to know more about the Moon and the craters on the moon.

Morton has a background in synthesizing science, technology, and cultures. He discussed how these three fields can work together in learning bout the moon and lunar crater.

Morton delivers this like an adventure story, which at times can indeed feel convoluted, but is still entertaining with the smooth transitions from one chapter to the next.

New technologies, new visions, and according to Morton, it is all but certain that humans (and robots) will return to the Moon pretty soon. A great read not only from the perspective of science but also for business and philosophy.

The Clementine Atlas of the Moon

A book based on the highly successful Clementine missions in the 1990s, and as the title suggests, is an atlas that gave us the first complete, global look at the Moon’s surface including the craters on the moon.

In total, this atlas contains 144 maps based on information gathered from the Clementine missions covering various lunar surfaces. Color-coded to show the moon’s compositions and other interesting properties.

The atlas is divided into three main parts: first, a concise summary of facts and the clementine explorations (as well as lunar prospector mission). The next part is an overview of the recent lunar data (globally), and the third is the maps with 6 pages of overview.

Also, with different color plates, it is easy to differentiate between different physical properties (i.e. crater depth, etc.). There are 2 pages for each Lunar Aeronautical Chart (LAC). A very comprehensive and easy to follow book.

A great atlas that is highly recommended to any hobbyists, amateur astronomers, and lunar scientists.

Turn Left At Orion has been one of the most popular astronomy books for all time, and is designed as a guidebook to observe the night sky covering information like how to use a home telescope, where to focus your scope on, and other useful charts, tables, and information

The book especially emphasizes on how you can find the object you wish to observe, and in regards to the moon and lunar crater, it has a really good section on the moon with a comprehensive seasonal map of the moon’s surface.

You can easily know the exact area where you’d want to observe and then check back on the book for additional information.

More than 500 different illustrations (not only of the moon but other astronomical objects) are included in the book, and yet, very easy to use and comprehensive. A great book to have for any astronomers and hobbyists with varying experience levels.

Unlocking the secrets of the moon, the lunar craters, and other mysteries will definitely require a lot more explorations and work. Yet, The facts we have discussed above, as well as the books we’ve reviewed, can be a great place to start.

Of course, if you’re looking to view the moon as close-up and as detailed as possible, then equipping yourself with a good set of astronomy binoculars, or a small backyard telescope, is the best way to go.

We’ve done some comprehensive reviews on the site that will, not only educate you on astro-gear, but also recommend some top performers in various price categories.

Feel free to check out these articles below: